SkyCycle Concept Is A Cyclist’s Dream 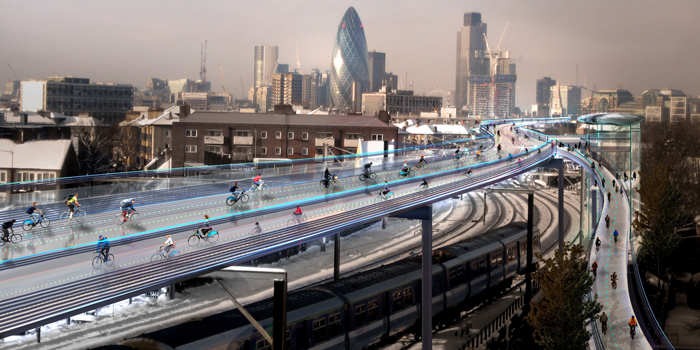 New plans have been put forward aimed at tackling London’s congestion problem which could transform the future of city cycling. Sir Norman Foster, the architect who designed the Gherkin tower, has unveiled his project named SkyCycle, which is a network of elevated bike paths built above the capitals railway lines that would allow people to zip across the city blissfully liberated from the roads below. Could this start a revolution for electric bicycles?

The proposed SkyCycle network follows existing rail lines and would provide over 220 kilometres of safe, car free cycle routes which could be accessed at over 200 entrance points. Almost six million people live within the catchment area of the proposed network, half of whom live and work within 10 minutes of an entrance. Each route can accommodate 12,000 cyclists per hour and will improve journey times by up to 29 minutes.

Lord Foster says, “By using the corridors above the suburban railways, we could create a world-class network of safe, car-free cycle routes that are ideally located for commuters.” He claims that early studies of the system have shown it provided capacity for more commuters at a much lower cost than building new roads and tunnels.

Even though the plan sounds like something straight from science fiction, if it becomes a reality then it could potentially signal a revolution for electric bicycles. The paths would encourage more people to cycle to work if the fear of cars and other dangers were eliminated from the equation, and create a system which could free up space, save money, encourage people to get active and help the city become more economically friendly.

Electric bicycles would make this type of system accessible to absolutely anyone, opening it up to thousands more people who don’t want to use normal bikes because they are unfit or dislike getting hot and sweaty in their suit before arriving at work. None of this would be a problem with an electric bike, which for less money than most annual rail fares, could last you for many years, providing a cheap, green solution which promotes exercise around the capital.

A spokesman for Network Rail has said they support the plans, but many tests will lie ahead. The team behind the project are looking to take money away from road and rail budgets, rather than cycling, claiming that the money currently spent could be much better used. A new transport system like this could be the answer to London’s problems, but with inevitable issues in budget and infrastructure, we can only hope it doesn’t end up as another forgotten dream.

If you are looking for high quality electric bicycles, browse our online store to find a fantastic selection of electric bikes and accompanying accessories. And if you would like to try any out, then visit our traffic-free test tracks in London and Buckinghamshire, where you can have a go on all of our latest models. For sales or advice please email [email protected] or call 020 7378 4728.